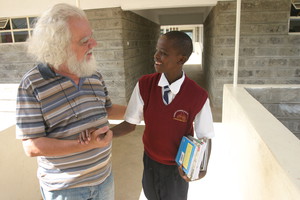 Koinonia has registered tremendous success in its core activity of helping the children since its inception. The first initiative was established by Father Renato Kizito Senana and the first Koinonia Community members in the early 1990s. They started to act in Nairobi and surrounded areas with the aim of improving the living condition of street children. Their genuine concern for the growing number of street children and street youths around Riruta Satellite Shopping Center prompted them to launch of a feeding, hygiene and medical program on the streets and at the Koinonia Mother House every week-end. As the members established deep relationships with children and youths, they learnt more about their needs for shelter, education and familial care. It was therefore out of these needs that Fr. Kizito mobilized funds to purchase land and establish the first Koinonia Children’s Center – Kivuli (in English A shade) in 1997. The Center began with 20 beneficiaries who were admitted to nearby Public Primary Schools and Vocational Institutions as per their will and capacity. The initiative achieved meaningful success because majority of the students completed their education successfully and are now self-reliant.

Koinonia’s quest to help the children did not end with the inception of Kivuli. Indeed, after having been registered as a corporate body in 1994, the Community identified the needs of the girl children for care and protection and thereby set up Anita’s Home for girls. The first batch of 10 girls was referred to Anita’s Home by Rescue Dada Girls Center. So far, most of pioneers have gone through the Kenyan Education System and can apply the skills they have acquired with time to earn a decent living.

In 2004, Koinonia recognized the upsurge in the number of street children in Kibera, the biggest slum of Nairobi. This was followed up with thorough street work, whereby the Koinonia social workers developed relations with the street children in the mentioned locality for one year. The relations culminated in the admission of the boys to Tone La Maji Center (in English Drop of Water)  in Ongata Rongai (Nairobi) in 2005. The boys have made remarkable achievements because quite a number of them have completed secondary school and are currently waiting to join college while some have received technical skills that have enhanced their self-reliance after undertaking vocational trainings.

In 2005, in order to address the issue of street children in Kibera closely, Koinonia founded the Ndugu Mdogo (in English Younger Brother). This project runs both a Children’s Home at Kerarapon and a Rescue Center based in the Kibera slum with the logic of establishing rapport with street children and intervening in issues that range from medical-care, nutrition, conflict with the law right on the streets before their final rescue and admission in the Rescue Center. Given that the Rescue Center is conceptualized to rescue children, the children only spend 8 months therein, before they are finally reintegrated back to their families or referred to the Koinonia main centers. Ndugu Mdogo centers has succeeded in reintegration and following up on cases whereby most of the beneficiaries have been reunited with their families and are currently pursuing secondary schools education and vocational trainings. 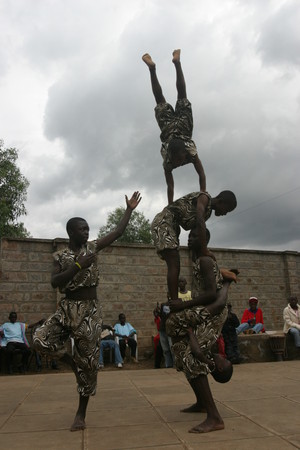 After reintegration, most of the beneficiaries felt there was need to continue with the solidarity they developed in the Koinonia Centers. This desire culminated with many initiatives that support the youths and, apart from the former street children who once were hosted by Children’s Homes of Koinonia, there are also many other boys and girls from the wider community.

Nowadays, almost 300 children are hosted in the different Rescue Centers and the Children’s Homes of Koinonia Community. Therefore, since the beginning of 2012, almost three hundred children left the street, joined school and started to shape their future in the best possible way. Moreover, we cannot restrict the commitment of the Children’s Homes and the Rescue Centers to the children because, the entire Community strongly supports the Family Reintegration Process, therefore the Centers support the parents or the extended families to be responsible towards their children in order to reintegrate as many children as possible. With regards to the reintegration process, during the last 2 years the Children’s Homes of Koinonia reintegrated 153 children back to their families. Supporting a family during the entire process means to sustain the family members to overcome their specific challenges through various kind of interventions such as Income generating Activities, Counseling sections and Follow ups.

Regarding to Education, during the last two years, 40 boys and girls completed their Secondary School with the support of Koinonia. Eight youths completed their Vocational Trainings and, concerning to the same kind of trainings, 16 youths are still attending their courses.  At the level of tertiary education 36 boys and girls completed their Certificate (in subjects like Accountancy, Project Management, Business Administration, Social Work and so on) while 39 boys and girls have completed their Diploma in the same subjects and are joining the job market. All these youths were able to turn their passions into skills and represent brilliant examples of successful stories of youths who have been rescued from the street and completed their education up to the highest levels. Nowadays, 550 students attend the already mentioned Schools and Vocational Training Centres thanks to the support of Koinonia and almost 1800 youths in the last ten years have attended them and they and their families have become self - supporting
Contact the webmaster by clicking here Webmaster