Koinonia Children Appeal for Peace Ahead of Elections

The main objective of this peace initiative was to mobilize children and young people who mostly have been victims of the violence, to voice the need for peace as the country prepares for next elections due in one month. 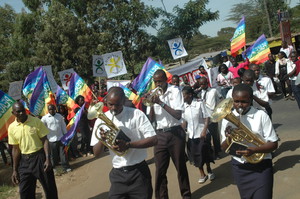 Children from the Various centers run by Koinonia Community,have participated in a peace campaign in the sprawling Kibera slums in a bid to appeal for peaceful co-existence among communities in the area ahead of the general elections scheduled for March.

Dubbed as Amka Kenya: Children for Peace, the event was held on January 26 in Kibera, organized by the Amka Kenya Team, in collaboration with a touring Danish art troupe under the appellation, Soko Festival.

The Amka Kenya Project is part of Koinonia Community cultural activities, and comprises of a boys choir from the Ndugu Mdogo Rescue Centre in Kibera which since October 2011 has been working actively.

The event kicked off with a peace march mid-morning starting from Kibera’s Karanja Road area, ending at the main venue at DC grounds where other day’s activities were held.

The main objective of this peace initiative was to mobilize children and young people who mostly have been victims of the violence, to voice the need for peace as the country prepares for next elections due in one month.

In attendance were also Koinonia Community, founder, members and staff who accompanied the children to the event in their call for peace countrywide. 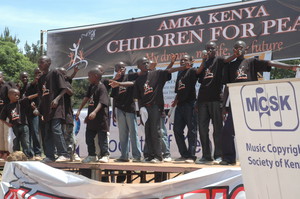 The peaceful march saw hundreds of residents and other participants throng paths of the slum’s villages as the procession snaked its way through to the main venue. Revealers held high banners and placards with peace messages on them as they marched on to the tunes of numbers serenaded by the Salvation Army band.

Activities of the day saw various presentations by participating groups ranging from folk dances to contemporary music performances by different artists. Later in the day, those present were treated to refreshments after the activities came to a curtains fall at 3:00pm.
The peace campaign comes as the country prepares to go into general elections on March 4, bearing the previous election of 2007 that plunged the country into bloody violence following disputed polls.

The just concluded party nominations exercise countrywide, rang bells of a repeat of the 2007/8 chaos following last week’s violent demonstrations along the Kibera main road over dissatisfaction with the exercise, bringing business to a shutdown.

There were several presentations by children from Koinonia Community including the Kivuli Acrobatic troupe, Tone la Maji Boys Choir and dancers from Domus Mariae school. The major performance was from the Ndugu Mdogo choir the main celebrants of the occasion, named after their much praised music album Amka Kenya.

The Amka Kenya team says their choice of music over any other form of art was because music is a powerful tool and children carry their messages in a humble manner, addressing to their elders, while serving as an inspiration to their fellows who are still on the streets.

Mr. Ndikwe, also a music director who has been working with the Ndugu Mdogo children in the music project since last September in training them on vocals and recording the music . Said he: “Children are the most vulnerable in situations when there is no peace and they are the most affected in situations of violence and that’s why possibly most are on the streets. Those from the streets are better placed to talking of that need for peace because they know better having not lived with that peace.”

Marita Rainbird of the Amka Kenya Team who has been working with the Ndugu Mdogo boys since 2011 in different other projects talks of various challenges they faced in the preparations of the event, bearing that many prospective sponsors were unwilling to support though they liked their initiative. 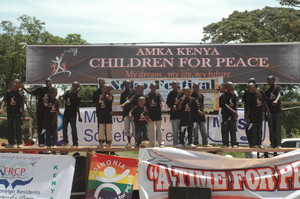 “We had several meetings with the donors and out of 30 only two managed to work with us, though many loved our project”, says Marita. “One area that was challenging was publicity but was covered by our commercial sponsor, the Music Copyright Society of Kenya (MCSK) which sponsored all our advertising.”
Marita thanked the local residents, religious communities, the police and the District administration who made the event a success it was saying the message of peace was well put across in the best way possible.

The Amka Kenya music Album comprising of nine gospel and patriotic tracks was officially launched on April 27 last year at the NDugu Mdogo Center in Kibera, in an event that was graced by former long distance athlete and peace Champion Tegla Loroupe.

The Partnership of Amka Kenya team with Soko Festival in sharing the event came through the Nafsi Africa Acrobats auspices, which has for a long time been under the Koinonia Community patronage.