The event was part of several other activities that the Centres have been engaging with the Work Campers’ group who have been with them since beginning of the month. 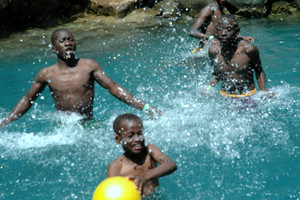 Boys from Tone la Maji Centre had a great day-out expedition to the Village Market Mall for enjoyment with company of visiting members of the Work Camp group from Italy.

The trip realised on Thursday 16th of August saw more than thirty boys from “Tone” as commonly referred to, set out on a trip to the Village Market mall located on the western outskirts of the city centre. It stood out to be a considerable long drive through the city’s suburbs while making way to the mall, though this won’t dampen the thrilling spirits of the voyagers determined to have the best out of the day.

Throughout the journey, they sang in unison many in variety of songs ranging in lingo to style and perhaps sounds that made it short for them to realise that they were already at their actual location, waiting to experience what they had been longing for.

The event was part of several other activities that the Tone Boys have been engaging with the Work Campers’ group who have been with them at the centre since beginning of the month. This has been in sync with other similar Work Camp groups visiting Koinonia Community centers that have been on a trail of activities for weeks now.

The visiting Work Camp group in Tone la Maji comprises of 12 members from different cities in northern Italy and for the second week running, they have been engaging with Koinonia children in a series of activities as part of their programme to voluntarily live and work in a communal environment.

This is in light with the volunteer workers’ motive to engage in social, ecological and culturally relevant initiatives for the benefit of the community, as they also make new friends and increase their international understanding.

The Thursday’s event saw the boys alongside the visitors enjoy the enthralling experiences at the mall’s world-class swimming complex. Not anyone went on without roller coasting through the waterslides at the amusement park, or not did the little-bit chilling weather deter the boys from going down the water-filled slides or sampling any water activity that was on offer. You could see some of them shiver with cold but the excitement they wore on their face had them going on, time after time. 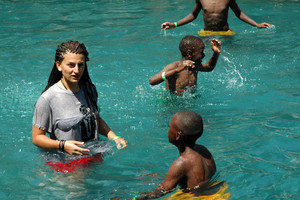 They enjoined with another group from Anita Home, a sister center for girls, who also according to their day’s activities were on tour in the same location. Earlier on a day before, another group of Boys from Kivuli Center paired with their team of visitors had visited the same place and bet they must have had a similar experience.

Head of the Campers’ group identified as Roberto says it was good for the boys to experience such particular moments with the visiting group to realise how much they were loved and appreciated.

“Most boys being from the streets, with no quite a family, find their families amongst those around them,” he said, “we should be that family around and always provide them that they seek.”

He identified how his group which is staying at the Tone Center with the boys for a considerable three-week period has had good and eventful stay  with the boys, somewhat might challenge them to come over again when offered another chance.

Additional activities at the center previously have been involving sporting, music and art events among other co-curricular activities, being a holiday season that are set to help the boys reflect on their various vocations.

Though many showed exhaustion  from the long day’s pleasure they were help up in esteem, knowing that several other activities waits them ahead as the group prepares for the last and much alluring activities which also shall mark the end of their stay.

Kivuli boys as well had an awesome day out on Wednesday 15 at the same venue of which their enjoyed every moment of it. 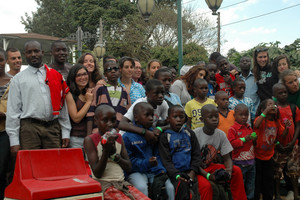