The event was aimed at bringing the interfaith organisations together in peace missions following the preparation of the coming General Election in March 4, 2013. 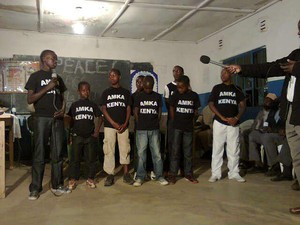 NAIROBI--Children from Ndugu Mdogo, Thursday participated in a forum of Interfaith Peace initiative at Kibra Academy in Kibera organised by the Muslim community in the area. Themed “To Call for Peace and Unity”, the event was aimed at bringing the interfaith organisations together in peace missions following the preparation of the coming General Election in March 4, 2013.

An evening prayer led by Haji Yussuf Hajee, launched the assembly on a spiritual note. As it grew darker, Muslims in attendance were also preparing to break their long day fast since it was the holy month of Ramadan.

The number present was served with a sumptuous meal irrespective of the religion. Ndugu Mdogo children immediately after took to the stage to perform their hit song Amka Kenya. Their stunning performance drew the attention of the audiences who later applauded the boys. Amka Kenya is their new composition created on the need for Kenyans to shun violence, tribal divide, political incitements and instead focus on national cohesion, informed choices of leaders and peace building initiatives.

“Shalom Alekum”,“Asalam alekum” signifying Peace from the Lord were centre to quite a few short speeches that sprinkled here and there from the religious leaders  with a strong message of peace and respect of religion .

Speaking during the forum, Father Kizito Sesana, welcomed the new initiative and expressed his sincere appreciation of the love and peaceful co-existence the children and staff of Ndugu Mdogo have enjoyed with the residents of Kibera since the inception of the project five years ago.

“I’m very happy that this initiative of working for peace has been born in Kibera and with our children project around, we have enjoyed the peaceful coexistence in the area for the last five years,” said Fr Kizito.

The event coincided with the August 27th day of the fasting month of Ramadhan where Muslims believe that it’s on this night of Laylat al-Qadr, when the first Holy Quran was revealed to Prophet Mohammed and is considered the most holy night of peace and blessings in the Islamic calendar.

Kibera has been a hotspot for chaos during electioneering period clearly witnessed in the 2007 general election where thousands were killed in the mayhem.