An account of the opening ceremony, on a greatly symbolic day with regard to the Universal Declaration of Human Rights, of the first rehabilitation centre for people with mobility problems in Nairobi’s largest slum, Kibera.

“Even here on the front line, human rights must be upheld”– Father Kizito
By Mauro Sarti__________________Translation by Lorraine Buckley 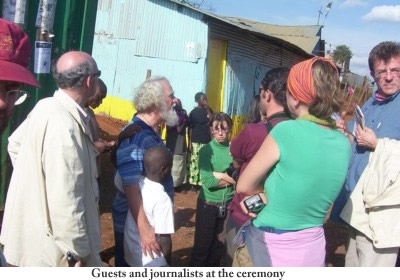 A temporary care home, with a physiotherapy gym and a sort of surgery room for medical examination, held its opening ceremony on the first day of the year-long commemoration of the 60th anniversary of the Universal Declaration of Human Rights.

However, it’s a bad time for celebration in the Kibera slum. The little white house that Father Renato ‘Kizito’ Sesana so badly wanted appears somewhat of a provocation right in the middle of the corrugated iron shacks, the dirt and the violence of Kibera, where 800,000 people live in what many consider the largest slum in Africa. In full view in the kitchen hangs a board with the ten commandments of the house: “We must love everyone…no fighting…have table manners…” Will the ten little rules be enough to help the new guests find harmony and the hoped-for family-type atmosphere?

A few days before, the first group of disabled children were welcomed to Paolo’s Home, where they received counselling and started their physical therapy. But it’s going to be a huge challenge. Here, talking of “people with disabilities” (to use the World Health Organization’s suggested terminology) seems almost nonsensical. What is the use of a wheelchair, if it can’t even get through the narrow entrance to one’s shack-home? And what if this shack doesn’t have a floor? In a place where there are no proper toilet facilities. How can one use crutches and walking frames without them sinking into the mud of the steep paths where open drains run down into dilapidated hovels made of corrugated asbestos sheets?
One can see right away that in Kibera, Nairobi, talking about integrating disadvantaged girls and boys has a quite different meaning from what we normally understand in the west.

“We started from scratch,” Father Kizito tells us. He and the Koinonia community decided to do something for those who had walking and mobility problems in the slum."

“Something had to be done,” he continues. “I know it is going to be a hard fight, made almost impossible by the living conditions in the slum. For now, we have just spread the word informally, without taking any formal communication, but already dozens of families have contacted us.”

Including Paolo’s Home in Kibera, Father Kizito has now set up four centres for disadvantaged children in Nairobi. The Kibera project, which opened on Monday, December 10th 2008, is the most recent.

With their black t-shirts, the volunteer women who run KISCODEP, the Kibera Slums Community Development Project, Father Kizito and Flavio Lotti from the Italian “Tavola della Pace” peace organization look and applaud from the front row. Their speeches at the opening ceremony invite everyone to respect and promote human rights.

Local association leaders had spoken before them. Dan Caleb Omullo, President of the Kenya Disabled Action Network, underscored how, in Nairobi, disability is often accompanied by the curse of AIDS. A seemingly impossible challenge. Then young Kevin told his story; Judith was trembling with emotion as she spoke. John Ondiege criticized what has long been called “therapeutic abortion” in Europe.

Then someone whispers that, here in Kibera, only physical disabilities are taken into consideration as handicaps.

Those with mental health problems never leave their homes. Rather, they stay hidden in their shacks. Their very presence in the home is reason for shame, and no one takes care of them. No one knows what to do. Paolo’s Home wants to help them too, and to give a ray of hope to those in the slum who have difficulty surviving from one day to the next – people who live on nothing and see their borderline existence amidst mud and dirt become even more difficult with the arrival of a child with physical or mental handicaps.
“Any children who have difficulty walking can come and get enrolled from the first week of January, then we will see what to do, and what therapy to start for each child,” Father Kizito’s appeal goes out as the sun beats down on the slum.

A little earlier, some children from Kibera had read aloud the first six articles of the Universal Declaration of Human Rights.

Mothers clap, cameras roll and notebooks open as foreign journalists attending the Nairobi international conference on “War and Conflicts in Africa” record the desperate yet dignified accounts of these women, who are resigned to asking too little of life.

Living in a slum is no life, even less so for people with disabilities.

“For now we have set things in motion”, Father Kizito tells us. “We’ll see how things progress. The important thing was to start giving a tangible service, another sign that people living in this slum can ask for human rights to be respected, and demand awareness and daily practice of human rights. Yes, even here on the front line.”