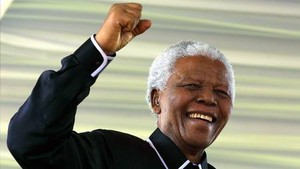 It is with great sadness that the South African Institute of International Affairs has learnt of the death of former President Nelson Mandela.  The Council and Staff of the Institute wish to express their sincere condolences to his family and to the nation that he served so humbly.

Nelson Mandela is an icon not only to South Africans but to millions of ordinary people around the world who followed his release from prison to become our first democratically elected president – a man who espoused forgiveness and nation-building rather than hatred and division.

He played a key role as an international statesman when he steered South Africa’s successful re-entry into the community of nations after the isolation of decades of apartheid.  His moral integrity and ability to bring conflicting parties together gave South Africa a unique position as an honest broker on the international stage.

We were honoured to welcome him to the Institute in August 2000 where he spoke on the role of the international community in cases of conflict and gross human rights violations, especially on the African continent. His remarks, then, still ring true now: “We have quite often in the past made comments that in this contemporary world of globalisation, we have indeed again become the keepers of our brother and our sister. The global village cannot only be such where it concerns accessibility and penetrability of markets; it must surely also mean that the ills and woes of one are the shared concern of all.”

A large mural of Madiba by print maker, Janet Wilson, hangs in our foyer – a reminder of that momentous visit. He commented, “Visiting this centre has been unforgettable experience.”

His legacy both domestically and internationally is enormous and we are the poorer for his passing. Yet his legacy lies in the preservation of the constitutional state whose first steward he was. We honour his life and his sacrifice by being true to the values espoused in our constitution: human dignity, the achievement of equality and the advancement of human rights and freedoms; non-racialism and non-sexism; supremacy of the constitution and the rule of law; universal adult suffrage; and a multiparty system of democratic government to ensure accountability, responsiveness and openness.