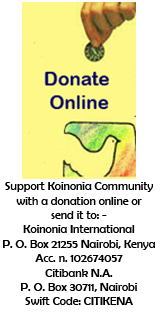 As Sudan’s Nuba people struggle to rebuild their lives after many decades of war, their path towards development has remained somewhat hazy. Many have placed their hopes in education as the light to illuminate this path that towards a better future…

Moustapha struggles to read through the browning newspaper, drawling word by word with a determination to get to the bottom of the page. As he invariably mispronounces a word here and there, his intonation betrays a mild Arabic accent.

“I don’t read good, but I will go back to school, learn to read and become a teacher,” the young Nuba declares in faltering English, looking up from the copy of The Sudan Mirror in his hands.

Like Moustapha, many people in the Nuba Mountains of Central Sudan consider education their surest path to a better future and development for their marginalized region.

Branded infidels by the Khartoum government, the Nuba suffered nearly two decades of sporadic bombings, attempted annihilation and slavery – a price they paid for supporting the rebel Sudanese People’s Liberation Army (SPLA), which waged a 21 year armed struggle against the domination of South Sudan’s “black African” peoples by the country’s Arab-Moslem-dominated north.

The Nuba were caught in the middle of the conflict, being as ‘black African’ as the South yet mostly Arab-speaking and Moslem like the North. Ethnographers attribute this borderline identity to the geographical location of their native homeland right between Sudan’s north and South.

Paradoxically, the northern government began persecuting the Nuba long before the SPLA made inroads into the Nuba Mountains. Many Nuba still remember the brutality and ferocity of the war years, when the distant drone of a plane often heralded an impending episode of death and devastation. 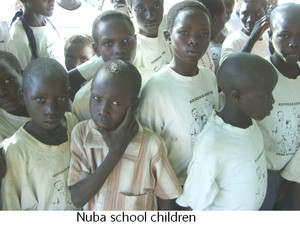 “We couldn’t even gather in groups because that would make us easy targets for air strikes. If you heard the sound of a plane, you lay down wherever you were, hoping to be invisible from the air,” Khalid, a young man from Gidel tells me.

A family eating its midday meal could suddenly be blasted into oblivion by ejects from Antonov bombers, yet survivors would gather shrapnel from the blast for use as hoes to till their farms.

Today, as the Nuba struggle to transit from the horror and despair of the war years, there are still no roads, no cars, no telephones or electricity in the Nuba Mountains. Although a few people own bicycles, most Nuba walk many long miles in the hot, sweltering heat to visit relatives or buy basic commodities from traders in the few dusty trading centres found in the region.

The Nuba still live in tiny mud huts with grass-thatch roofs, which lie scattered across the patchwork of scrubland valleys, dry river beds and ancient-looking ridges that sear upwards from the plain lands of Southern Kordofan province.

Visitors to the region are warned not to veer off the pathways – landmines lurk hidden in the undergrowth, furtively waiting to explode on impact. The landmines were scattered by the Khartoum army during the war, and occasionally cause the loss of a limb, and sometimes life in the area. There is a UN demining operation in progress, but it could take years before a semblance of safety is achieved.

Although the war ended with a comprehensive peace deal in 2005, there is still little evidence of development activity by the government. Most social facilities like schools and hospitals are supported by NGOs, which bring their relief provisions and aid workers into the Mountains via jagged airstrips with earth runways.

A Nuba SPLA colonel expressed his concern at a closing ceremony for a primary school in Kujur Shabia last June, asserting that unless development went hand in hand with peace, the Nuba fighters who died in the armed struggle would have lost their lives in vain.

“Go tell the world that the so called peace only exists on paper,” Colonel Hamza Jemri assigned to the foreigners present at the ceremony, who included an Italian Comboni missionary, Renato Kizito Sesana, who is renowned for his many years of humanitarian work among the Nuba, as well as two aid workers from the NGOs, Amani and Koinonia, and this writer.

With government support remaining unreliable and abysmal, the Nuba people have depended more and more on NGOs to facilitate the education of their subsequent generations.

"In our current situation, education is the only way forward in our struggle towards meaningful development, " Hassen Ayoub Alfagara, a young man who graduated at the top of his class from the Yousif Kuwa Teachers Training Institute explains.

A large majority of the local schools are run by NGOs. They are typically understaffed and overcrowded, and those that teach their classes in English are excluded from government funding.

“Only Arabic-language schools are funded by the government,” Abraham Kundaji, the headteacher of the Koinonia Model School at Nyaru says. 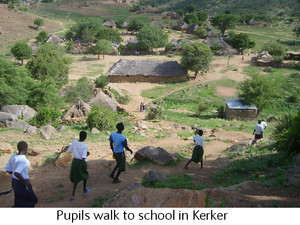 According to Kundaji, most Nuba schools prefer to use English as their medium of instruction because they deem it more relevant to the future of the Nuba.

“English brings us closer to our brothers in South Sudan and in other neighbouring countries like Kenya,” Kundaji opines. “Most Nuba schools in fact follow the Kenyan system of education, which is conducted entirely in English, save for one subject, Kiswahili,” he adds.

Kundaji informs me that finding teachers is a big headache. In his own school, he has only three teachers for 235 students. But this is not the worst case scenario. At the Musa Arat Primary School in Kujur Shabia, head teacher Jamal Abdallah claims his school is one of the best staffed in the region - with a paltry 11 teachers against a 474 pupils.

“There are schools with only four teachers, yet their pupils number 600,”Abdallah explains.

Fortunately, the Kauda Teacher Training College (KTTC) and the Yousif Kuwa Teachers Training Institute (YKTTI) at Gidel – both of which are run by NGOs – offer teacher training courses. According to the principal of the YKTTI, his institute has produced an average of 70 new teachers each year since 2001.

Early female marriages are one of the biggest setbacks afflicting education among the Nuba. While male pupils are ubiquitously encouraged to study and train for a vocation, many girls drop out of school before even completing their elementary studies.
“In many cases, the marriage is actually arranged by the schoolgirl’s parents, ”Kundaji says.

In one school, nine girls were impregnated, three were married off and 18 simply stopped attending school in the past school term. Salua Kapi, a local women’s representative, complains that too many Nuba girls “play poker with their futures”.

“Since this school was established, no girl has ever completed her time here, proceeded to college and returned a teacher, ” Kapi says disappointedly.

At Serbule, about forty community leaders and other locals have volunteered to provide labour for the construction of a new site for a school, which is set to relocate from a hilly locality called Kerker to the flatter plains of Serbule.

Fr. Kizito, the Italian missionary whose NGO, Koinonia Nuba, supports the school, arrives with his team of humanitarian workers from Nairobi, Kenya. They assess progress and sit down on the grass with the locals for an open air meeting to discuss progress.

Through an interpreter, the locals promise to recruit their children after schools close later in the week, so that they can work faster to ensure they complete construction in time for the start of the new school year in October. Earlier on, about two dozen locals had voluntarily helped the NGO officials offload a shipment of donated benches at the Kauda airstrip.

This voluntary participation by the locals is a valued incentive to the NGOs, and enables them integrate their projects into the communities with greater ease.